Solar power for around 300 households

Green electricity for a good 300 households – at least in purely mathematical terms, the photovoltaic systems that Spedition Steinbach will soon be putting into operation on the hall roofs in Bayreuth and at the Ismaning site will be sufficient for this.

A Small photovoltaic system has already been in place on one of Steinbach Spedition’s roofs since 2011, but the PV system that has now been additionally installed has a completely different dimension – it is around ten times as powerful. 750 kWp is the corresponding nominal figure. It can generate about 750.000 kWh hours of electricity per year. This is made possible by about 2200 solar modules that cover three more large hall roofs of Steinbach Spedition in Aichig. At the Ismaning site, near Munich, a PV system of almost the same size was also installed. The project partner is the Nuremberg-based company Greenovative. About a year had passed from the initial planning to the commissioning in the coming weeks. The investment sum is in seven figures. The PV system will pay for itself in about 20 years. Above all, Frank Steinbach wants to contribute to the fight against climate change. That is why electric charging stations have been installed on the company’s premises in Bayreuth and electric cars have been purchased. 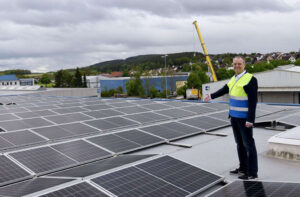 However, Steinbach Spedition does not need as much electricity as the system produces. The company’s own demand is calculated at around twelve per cent. The Company does not plan to have its own storage capacity, which is why some electricity will be taken from the general grid at night. Above all, however, energy will be fed into the grid, which is why a large truck-mounted crane was used yesterday to hover a new transformer onto the company’s premises. Once it is connected, the green electricity can begin.

Christmas Packages for Children in Romania