“Big 5”, Steinbach Spedition’s first show truck, was dedicated on May 5, 2017 at the company site in Bayreuth and now cruises the roads of Europe.

Even before the vehicle – a DAF XF510 Super Space Cab – was ordered, special attention was paid to unique features like skylights, LED headlamps, a roof spoiler and fenders, cab-colored mirrors, signal horns, special shades and spotlights. The driver’s cab is especially comfortable because it has a cabinet instead of an upper bunk.

A precise concept was required for the project.  But the time frame was tight: Only a few weeks were available for the job. The idea to get a show truck didn’t come until November 2016. The first meeting with the artist took place on January 11, 2017. After a few more talks, we received the first drafts for our airbrush project two weeks later. The goal was to paint both sides differently and to give the truck a “face” from the front. The draft designs for the trailer followed. Our motor vehicle mechatronics technicians disassembled the vehicle into many pieces before the paint and brush work began. The project started on March 3, 2017. Artist Jörg Wolke airbrushed through the weekends. Then the paint shop technicians coated the vehicle with multiple layers to give it a shiny finish. The cab was finished on April 3, 2017.

The truck will be on display at the Trucker Festival in Friedenfels May 12-14, 2017 to benefit children with cancer in the Upper Palatinate North region. The event will feature airbrushed show trucks, a trading area, a “bear cave” for adults, face-painting for kids, line dancing with the Flyingboots, and more. Steinbach Spedition is also supporting the Kinderkrebshilfe project with a donation. 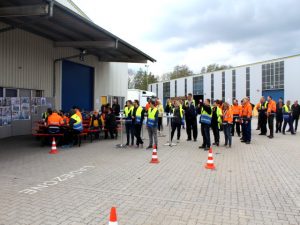 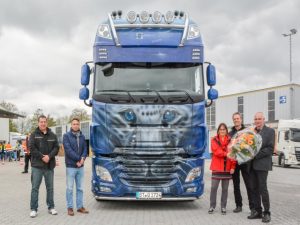 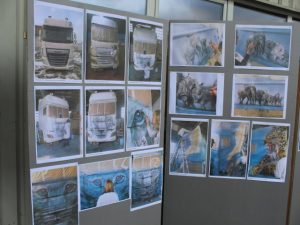 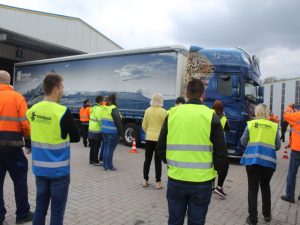